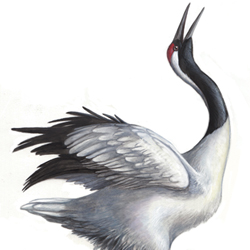 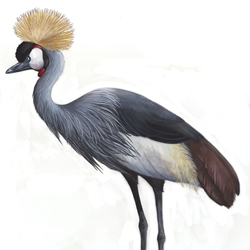 The golden eagle, Aquila chrysaetos, is bar-none one of the most magnificent of all birds. Its huge size and fierce habits have made it especially well-known among birds of prey, and its ubiquity across the world has made it an icon of hypercarnivorous success. With a nearly 8-foot wingspan and extraordinarily strong grasping feet, the golden eagle's predatory power is arguably unmatched by any extant bird.

As a paleoartist specializing in deinonychosaurs, its foot is of particular interest to me. Like all eagles and most accipitrids writ large, the second pedal ungual is hypertrophied, and this represents a fascinating point of convergence with the same hypertrophy in extinct dromaeosaurs. This similarity, combined with the short, stout, and remarkably robust metartarsus, has led to the inception of one of my favorite papers in modern paleontology, and to fascinating conclusions about predatory behavior in dromaeosaurs. To quote the paper in question, by the inimitable Denver Fowler and colleagues:

It is important for extant predators to quickly subdue their victims, lest they escape or retaliate against their attacker. ... To prevent escape of large prey the raptor pins its victim to the ground using its bodyweight, then plucks away feathers or fur, exposing an area of flesh. For immobilisation, falcons will quickly attempt to snap the spinal cord to kill the prey, but accipitrids lack the physical specializations for this. Instead, accipitrids possess hypertrophied talons on D-I and D-II which are adaptations for maintaining grip on large struggling prey. Accipitrids’ talons lock into their prey, keeping hold despite vigorous struggling, allowing the raptor to begin feeding. In such cases, death of the victim is hastened by massive bleeding from wounds sustained whilst being eaten alive.

An understanding of how foot morphology affects predatory ability in extant birds of prey can inform interpretations of similar variation observed in extinct non-avian theropods. ... We suggest the enlarged D-II claws of deinonychosaurians were used to grapple prey in a fashion comparable to accipitrid birds of prey, and are part of a suite of features that indicate ecological separation within Deinonychosauria and Paraves.

The golden eagle is referenced specifically for some of its unusually ghast predatory strategies:

Published accounts of this rare (indeed, disputed) behaviour are anecdotal, but the process by which golden eagles kill large prey is of interest. In most accounts, eagles form a tight fist with their feet, and stoop their prey, striking it at speed. Clearly, this behaviour is not possible for non-volant deinonychosaurians. However, rarer accounts record eagles ‘‘prey-riding’’; embedding their talons deep into the backs of their much larger prey and holding on as the victim’s vigorous retaliations serve only to widen the wounds. Prey-riding can be considered as an extension of the typical accipitrid predatory strategy for dealing with large prey, except that here the victim is too large to be pinned down by the raptor’s bodyweight. In order to prevent escape the raptor merely holds on with its hypertrophied talons. Some anecdotal sources suggest that piercing of internal organs by talons hastens the death of the victim. Experiment and observation has shown this to be unlikely. Instead, the victim is probably immobilized by weakening through exhaustion and/or loss of blood.

Jurassic World's overgrown scaly lizards have nothing on this magnificent bastard.