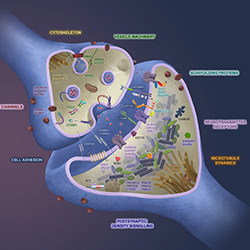 Caption from figure in paper:

The 59 genes listed in the figure were selected as follows. We began with the 30 gene-set clusters in Supplementary Figure 22 and dropped those that include gene sets that were implicated in a previous study of EduYears (Supplementary Table 4.5.1 of Okbay et al. 1). Of the 8 clusters that remained, we retained the 4 related to neuronal communication (DAG and IP3 signaling, associative learning, post NMDA receptor activation events, regulation of neurotransmitter levels). We identified the 460 DEPICT-prioritized genes belonging to the exemplary gene sets representing these clusters (membership Z score > 2). Of these, the figure shows the 59 genes that appear in a figure or table of Fain (2014); these are genes whose functions are considered important for neuronal physiology.