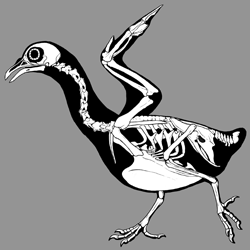 This is a rough cladogram showing the evolutionary relationships of all the major animals that humans tend to eat.

Similar to The Tree of Yum: Plantae, which shows the evolutionary relationships amongst the majority of plant matter that humans consume on a regular basis.

This isn't meant to be a completely rigorous study - as in the Plantae cladogram, the branch lengths aren't meant to represent the divergence time, and some clade ranks (particularly genera) were omitted if the groups happened to be somewhat paraphyletic. I also didn't include sub- or super-ranks, and I didn't bother nesting orders and families if the nesting wasn't completely obvious, as that would require more research than I have time to spend on a project like this for fun.

Obviously this also doesn't demonstrate all of the animals that people eat across the globe - I've especially given fish the short shrift, but edible fish pretty literally go on forever, so I had to draw the line somewhere so the graph wasn't overly dominated by them. There are a ton of other animals that people eat that I didn't include here - this is meant to represent the more "normal" meats typically eaten in the western world. If I included absolutely every animal eaten by humans, I'd have a ridiculously exhaustive list that has little bearing on reality for the average culinary westerner. This cladogram is probably a little less interesting than the plant one, because it is far more intuitive. Most of us with a passing interest in biology could have figured out the gist of most of these relationships, but nevertheless I hope that some of you learn something from it.