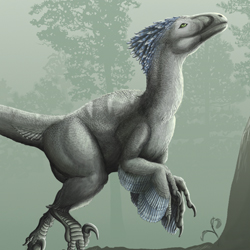 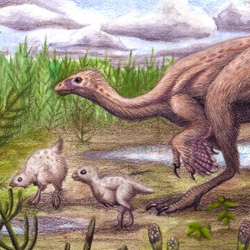 Anchiornis huxleyi was a small eumaniraptoran dinosaur, formerly classified as a troondontid but whose phylogenetic placement is currently muddy. Its remains have been found in the Late Jurassic (Oxfordian) of Liaoning, China, and hail from the Tiaojishan Formation.

I ran into an unfortunate predicament with this painting that I hadn't yet experienced in my artistic career. Right when I had completed it, a new study was released that described in fantastic detail the coloration that this animal's feathers would have had in life. I was extremely discouraged by this news, but since this painting is going to be published and needed to be as accurate and reputable as possible, I painstakingly repainted the animal to reflect the findings of the new study.