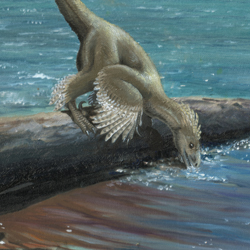 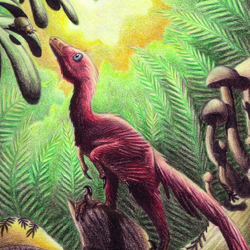 This is the famous feathered dino-bird Archaeoptyerx lithographica in its native environment of the tropical Solnhofen, of modern-day Germany. Archaeopteryx was a very small animal, roughly the size of a modern-day pigeon (not including its long, bony tail, a feature not found in extant birds) and lived 150 million years ago in the Tithonian stage of the Jurassic. Archaeopteryx remains one of the best champions of evolutionary theory due to its status as a "transitional" fossil, providing a clear example of an overlap of avian and dinosaurian features.

Though originally thought to be the earliest example of a true bird, Archaeopteryx also has a great deal in common with other theropod dinosaurs, especially deinonychosaurs, and was probably a poor flier. It had many small, sharp teeth, three-fingered hands, a long, bony tail, and lacks a bony breastbone but possesses a large wishbone. Most of the discovered Archaeopteryx fossils clearly show imprints of advanced feathering, including asymmetrical flight feathers on the wings. It also lacks a fully-reversed hallux, indicating that it was probably not capable of perching in the same way that most modern birds are able to do. It was probably more of a climber, glider or a runner than a bird capable of true powered flight.