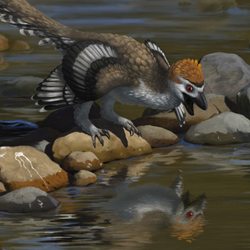 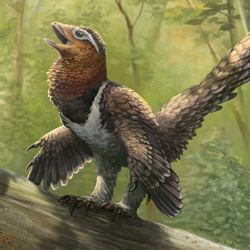 The second of my illustrations for the new study by Cau, Naish & Brougham which demonstrated an avialan affinity for the "double-sickle-clawed dromaeosaur" Balaur bondoc. This new phylogenetic placement restores Balaur as an omnivorous, climbing, flightless bird. Its second "sickle" claw is simply more of an enlarged and more mobile hallux, as Balaur's pedal claws lack the severe falciform shape typical of most other deinonychosaurs. Nevertheless, this is unusual foot morphology and was probably using these large-clawed, mobile, grappling feet for some amount of incipient climbing abilities. This illustration shows one way that it might have grasped a low-hanging branch with its feet in order to balance in a perched position.

This new paper is open-access and may be read here: peerj.com/articles/1032/