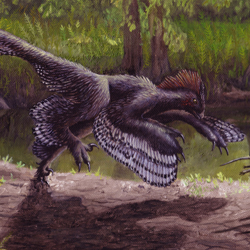 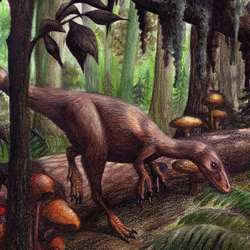 This is Caudipteryx zoui, a flightless, feathered, basal oviraptorosaur from the Yixian Formation of China. It's currently the oviraptorosaur with the best-preserved feathers. This dinosaur was around the size of a large turkey and is named after its rather impressive tail fan, the feathers of which are clearly preserved in its fossil.

Though not as birdlike as certain other dinosaurs, Caudipteryx did have pennaceous feathers on its arms, similar to modern birds.