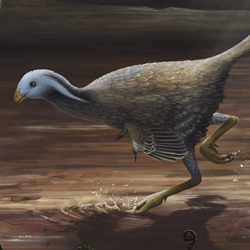 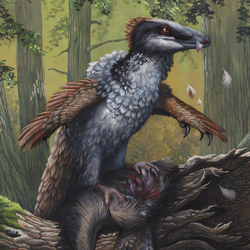 After months of eager waiting I can finally share this... meet Dakotaraptor, the giant dromaeosaur from Hell Creek! This is the first giant raptor known from this formation, and—more significantly, in my view—the first giant raptor with robust, obvious, unmistakable quill knobs. At over 16 feet in length, this magnificent fellow was in the upper size range for Utahraptor, though very differently proportioned: where Utahraptor is stout and muscular, Dakota was lanky and lithe, like a scaled-up Deinonychus. Here I've shown it alongside the early shorebird Cimolopteryx for scale.