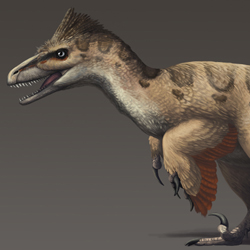 Obviously this is a very speculative scenario, perhaps a bit All Yesterdays-esque, and is speculative in a number of ways:

1. Family groups in dromaeosaurs are definitely not outside the realm of possibility, and may be more likely than the tired "pack" scenario, at least until the young disperse (fledge? Wean?). Here, the male and female are depicted in a monogamous pair-bond, and jointly care for the young.

2. The male is the more brightly-colored of the two, and the female is similarly-colored but a bit duller, and with more banding. The display feathers in the male are green due to a pigment molecule similar to the pigment turacoverdin, the only known green pigment in birds, and the pigment responsible for the green coloration in turacos. There is evidence to suggest that turacoverdin - or a molecule structurally very similar to it - arose at least twice in modern birds, once in turacos and once in the northern jacana, a totally unrelated bird. Therefore it's not totally outside the realm of possibility that a similar compound evolved independently in dromaeosaurs as well. Turacoverdin is copper-based porphyrin and turacos derive their copper from the fruit they eat, but Deinonychus could derive its copper from the livers of its prey, which is also high in copper.

3. The female is carrying its young on its back, much in the same way that some waterbirds like loons and grebes, as well as crocodilians, do with their young. The idea is that Deinonychus occupies a large territory and would needing to constantly hunt to feed the brood, and would be moving location too frequently for young to easily follow on foot. Here, one chick is using WAIR to climb up its father's back, which is something that some modern young birds also do.

4. The chicks are patterned similar to baby ratites, which are often streaked or spotted until they get older.

5. The feathery toes, while not terribly unique due to finds like Anchiornis, are loosely based on Matt Martyniuk's new post on dinosaur foot scales, which indicates that scutes may have evolved from feathers, rather than the opposite. The chicks here don't have feathery feet because the animals would have evolved from an ancestor that had pebble-scaled feet without feathers or scutes, and ontogeny occasionally very loosely recapitulates phylogeny. (Alternately, I could have depicted the chicks with voluminous legwings, since legwings may have been an intermediate stage between pebble-scale feet and scuted feet).