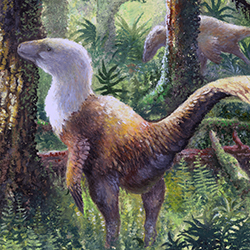 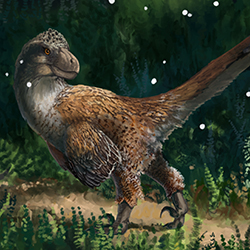 How Arboreal were Juvenile Deinonychus? August 2022

Were juvenile Deinonychus potentially arboreal? Paleontologists Bill and Kristen Parsons seems to think so, based on the limb proportions of the juvenile specimen MCZ 8791, aged approximately one-and-a-half years. This and other juvenile Deinonychus specimens show an extreme elongation of forelimb bones relative to adult specimens of Deinonychus—proportions that, in fact, closely mirror those of smaller flight-capable (or gliding-capable, at least) dromaeosaurs with elongated feather impressions from China. Multiple juvenile specimens of Deinonychus also show a much more strongly recurved sickle claw that is similar in curvature to climbing species of modern birds, an idea explored in more detail with this illustration.

Unlike the beautiful volcanic ash-preserved feather details common to many Early Cretaceous Chinese maniraptorans, Deinonychus fossils are found in North American formations that typically do not engender feather or soft-tissue preservation, so this hypothesis can only be based on osteological correlates—for now. And while the flight capabilities of the Terrible Claw are as yet unknown with full clarity, I am personally convinced by the Parsons' rationale for limited climbing and arboreality in juvenile Deinonychus, based primarily on the marked differences in proportion of the forelimb and claw elements of juveniles relative to adults.

Bill suggested to me that the forelimb feathers of the juveniles in this illustration may be up to three times longer than shown in the original illustration of this scene. I've decided to update that piece with an alternate version, illustrating a probable unique niche for juveniles as they hunt, rest, squabble and preen in the limbs of a large Ginkgo apodes.