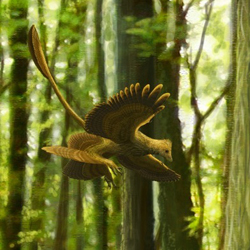 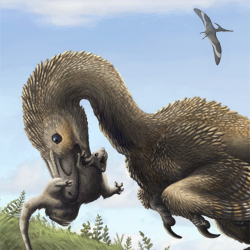 This is the newly described troodontid Talos sampsoni of Utah's Kaiparowits Formation. The described specimen of this derived troodontid had an interesting feature, which is that the sickle claw-bearing toe of the left foot had been broken in life, including a surface lesion, and had then healed. The authors speculate that the toe may have been damaged in some sort of physical trauma or infection. A popular theory is that it was damaged in the act of predation, though that remains a speculative idea.

Here I've reconstructed it inspecting the hurt toe after the injury had occurred, perhaps cleaning it as best as it was able.

The paper is open access, so please feel free to read more about it here.