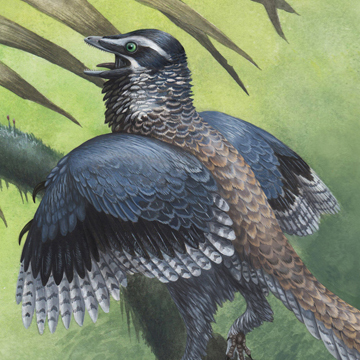 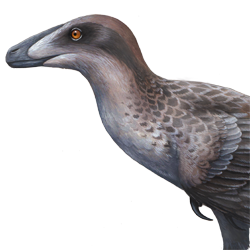 This is a speculative reconstruction of a subadult Deinonychus displaying semi-arboreal characteristics. It's based on the tenuous assumption that the type specimen (YPM 5205) represents an immature animal, as compared to later specimens with slightly different morphological characteristics, most notably the Harvard specimen (MCZ 4371) described in 1976. Ostrom noted in the description for this newer specimen that one of the major differences between this and the type is the angle of curvature for the second pedal claw: the newer specimen had a much straighter sickle claw, while the original was very strongly curved. However, he had no opinion at the time on whether this difference in morphology represented individual, ontogenetic, or sexual variation.1

In 2006, Parsons & Parsons demonstrated unequivocally that the Harvard specimen is a sexually mature adult, and identified some unique adult characters associated with this and other mature Deinonychus specimens.2 Further study by the same authors in 2009 tentatively indicates that the type specimen—a possible subadult—may be associated with arboreal characteristics. Adult specimens are also found to have proportionally shorter arms, leaving room to speculate whether the longer arms of subadults could have been a semi-volant adaptation involved in some incipient gliding (or, perhaps more accurate for an animal that size, "descent-slowing") capabilities. The more strongly recurved second pedal claw is implicated in climbing, and its lateral compression and inner arc are compared in this paper to the same ungual in Melanerpes, the red-headed woodpecker (a highly scansorial modern bird).3

Behavior rarely fossilizes, and the idea that immature Deinonychus occupied a partially arboreal niche is still highly speculative, especially given that few modern archosaurs possess markedly different ecologies at different ontogenic stages. And while I don't usually support copying extant birds this precisely for serious paleoart, it proved to be an excellent practice piece to flesh out a highly speculative idea.

This piece is based directly on an excellent photograph by my most admired living scientist, experimental psychologist Steven Pinker, who was kind enough to grant me permission to do so. Pinker is a world-renowned cognitive scientist as well as a talented photographer, and you can check out more of his better angles of our nature on his website at stevepinker.com.

It's interesting to note that of all known specimens of deinonychosaurs, a sizable percentage of them represent juveniles or subadults, animals that lived very brief lives before succumbing to nature's indifference. For the life of a Deinonychus was surely solitary, poor, nasty, brutish and short.